The building shell on a new building has undergone a pronounced transformation in recent years, both in housing construction and non-residential building. The trend towards energy-efficient facades has been reinforced by the use of glass and elements with insulation and improved heat gain characteristics, and it is set to become of increasing importance in the future.

However, the major focus of the construction work is the renovation of old buildings. And one basic prerequisite for a functional facade is expansion joints which compensate the movements of the building and structural elements, as well as preventing damage from occurring due to the weather.

In the case of major building projects it is sometimes necessary to erect parts of buildings separately for structural reasons. The joints between these buildings must then be classified as joints that separate buildings and it is their function to compensate the movements of the parts of the building. Joints of this type can be sealed by means of elastomer tapes. Injectable sealants are not suitable in this case.

By contrast, facade sealing comes under the scope of DIN 18540 or DIN EN ISO 11600. Such joints in concrete facades, unplastered brickwork and/or natural stone do not function as compensation between parts of buildings; they have a sealing function within the facades. 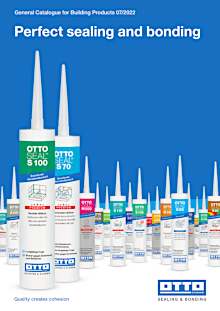